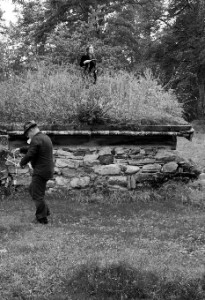 As it gently erodes, washed away by the slow undulations of time, phantom movements are projected outward, stretching across the lonely island. The chaos of ordered angular forms, snatches of memory and moment are whirling in a slow fragmentation; a tangible dream, made phantom by the protracted nature of its movements.  Now a figure appears, and another, and more; accidental projections, or moments, who can tell. They weave a gradually appearing arc of slow, precise movement. Each of these silent acts seem to be imbued with an elusive meaning, a connection to some vast, hidden world which softly permeates our own. The observation of them pulls us into somnambulism, tracing our own outlines into the surrounding air. The constellation is gradually closing, drawing together unintentionally. The moment grows stronger as it approaches the time it must fade back into the cold air. Schwitters is watching, his invisible hands making continuous adjustments to the configuration, so engrossed in this meditation, that we are rendered ethereal ourselves, and stand hypnotised before his slow winding dance of structure.